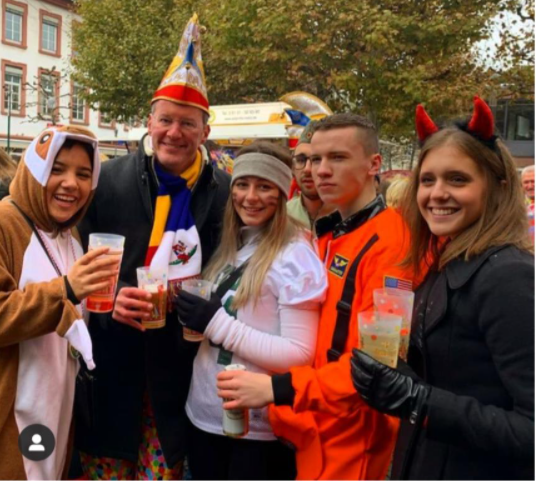 My name is Gregor Jones I am 20 years old and a student at CBS Mainz. Due to the current lockdown and the resulting dying social life I moved back to my parents house as I cannot do any sports, activities or evenings out with my friends there. But this blog will not deal with my triste and boring life in idstein. Moreover it will bring you back some hope by giving you an impression of how great the life as a student at CBS Mainz is.

In the beginning of the semester we all got together very quick in the university. In October we had the first Halloween party at the CBS Campus in Mainz. We all got dressed up and brought food from our home countries. We mingled, drank, ate and made new contacts.

Here a picture with Raphael Beckenbauer dressed up as twin Astronauts:

While In my small hometown carnival was celebrated in the evenings by dressing up for a party with a maximum of 500 people in a big hall, people from Mainz do things differently. Before going to the Schiller Platz at 11:11 to celebrate by drinking, we met at 9 o clock at a friend’s apartment with other students from the CBS for pre drinks and breakfast.

When the time came we and other crowds of students from all different age groups and with all different costumes walked in hordes through Mainz all with the goal to get in front of the townhall for the majors speech. There were thousands of people at that place especially university students at that place.

There was such and energy all were drunk, singing and having a good time. Me and my friends even got to get a photo with the major 😀

In Mainz we also call it the 5th season of the year;)

Parallel to the huge mass of people at Schiller Platz, all bars and clubs around it were open and full to its last square centimeter! Walking a distance of 100 meters from your friend group to a bar to get a drink or use the facilities could take up to 5 minutes. Something nobody can imagine right now. Worse was finding your friends again while being drunk and away for too long. I can only recommend experiencing it once in a lifetime.

One of the best things living in Mainz occurred once a week at Wednesday, which is why that day is also called Bergfest (Moiuntain fest). On that day the students from our semester had a specific route with only minor variables. Every Wednesday night we met for pre drinks at either a friends apartement or a community room from a college dorm. When we were ready we began or journey by walking to THEKENKIND were we played Beerpong in Teams against others in a competitive tournament. We weren’t the best, but we had funny team names and a lot of fun. At noon or when everyone was done, we were heading to our final destination. This was usually the “Red Cat” or “Schon Schön”. Now was the time to show what you got, show your moves and show your personality besides university!

I still remember the first week were one Girl had her birthday that night and we bought shots for each other and dance till late in the morning. Of course, we still had lectures at 9 o clock we all showed up relentless of our mental or physical state. But after that night, all the people who were there became close friends. The tension was broken because besides being at a private university we realized that inside, we are still human.

I hope you got a nice impression of my 3 highlights going out.

Hi,everyone! We are a group of students from Mainz. On this site, we want to tell you about this city from different perspectives.